This morning was bright, sunny and crisp here, and I set out to get some pictures.  I made sure to bring extra batteries with me as I caught the train downtown.  My plan was to get some shots around the White House, work my way up the Mall, and then take a few of the Capitol and then catch the train back.  Simple enough, right?

I wanted to get a few of the White House because today is sunny and cheerful, and every other time I’ve been able to get over there it has been dark and cloudy and rainy.  I have bright and sunny photos of the Capitol, but that was in summer, and the trees and landscape are quite different now; I wanted some autumn shots while they can still be had.

The north front of the White House was all in shadow with the sun right behind the building as I expected at that hour so I walked down the Avenue to E Street on the other side of the Treasury Department and went to the back for a shortcut to the south front: Closed! I had to go all the way to Constitution Avenue and then turn west toward the White House and walk across The Ellipse and then cut through the fences to get back to what used to be Executive Avenue to get my shot, and I got several.

Oh, by the way, you will be happy to know that they are getting the National Christmas Tree all spruced up and ready to go!

After I got a few shots of the south front, I was informed that my way back was now closed and I was routed back toward E Street into the area that was closed there, but I just kept going and nobody stopped me and so I returned to E and then had to walk back down to Constitution Ave,, cross it and enter the Mall by the Washington Monument where the crews appear to be removing the scaffold that has been around it all year.

As I am writing this, the fire alarm goes off in the building!!!

Now, an hour later, i resume.  The Fire Dept has allowed us to return, but the basement is off-limits; apparently there was an incident of some sort down there.  They sent six fire trucks!

It was great fun standing out there in mid 30’s, and of course shade.  There were many people, newborn babies, cats in crates and much amusement..

OK, now where was I?  Oh yes, I was posting about how nothing much went right for me today.  OK, I had to walk all the way back down to the Washington Monument and then cross Constitution Avenue and proceed up the Mall looking for “targets of opportunity” to photograph, and I made my way all the way up to the Smithsonian Castle, about a half mile or so, when it happened; my batteries died.  I found a bench right near where a teacher was arguing with his class of school kids on a field trip, and I switched batteries. I turned the camera back on: Nothing.  It seems that my new batteries were really old batteries.

When I returned to base, I discovered that there were no batteries here either, so I can’t upload what pictures I did get today, and I probably won’t have new batteries until Saturday which is a little frustrating to say the least, but there is good news.  I got out in the fresh air, got lots of exercise, laughed quite a bit when things didn’t go my way, and maybe if I’m lucky I have some cool pictures to share.  I did have one from today, other than fire trucks because I did get one picture with my phone.  Seeing it reminds me of why I use a camera instead of an iPhone for taking pictures, and here it is: 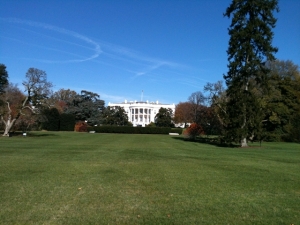 Believe it or not, that fuzzy little white thing is the White House.

A long time teacher and writer, Don hopes to share his varied life's experiences in a different way with a Christian perspective.
View all posts by Don Merritt →
This entry was posted in Christian Life and tagged attitude, Christian, fun, life, perspective, photos, random. Bookmark the permalink.

4 Responses to OK Now What?