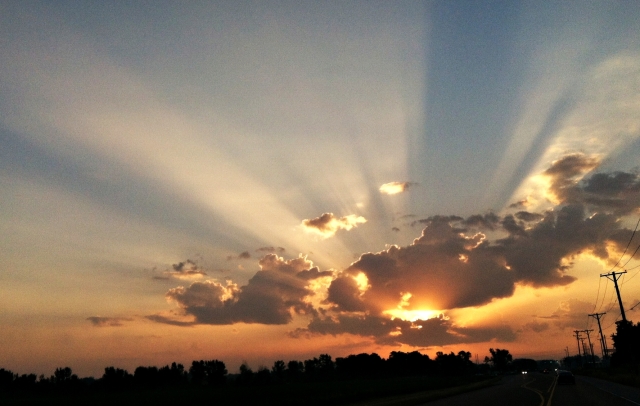 In the past God spoke to our ancestors through the prophets at many times and in various ways,but in these last days he has spoken to us by his Son, whom he appointed heir of all things, and through whom also he made the universe. The Son is the radiance of God’s glory and the exact representation of his being, sustaining all things by his powerful word. After he had provided purification for sins, he sat down at the right hand of the Majesty in heaven. So he became as much superior to the angels as the name he has inherited is superior to theirs.

Here we are at the beginning of a tour of a new book from the New Testament, my very favorite book of all, a book that will show you how the Old and New Covenants come together, a book that will both challenge and encourage each one of us.  I sure hope that you will have the time and inclination to be fed and encouraged on out tour.  I have previously posted my class notes for Hebrews, and will plan on linking them as we go, for those of you who desire a more academic study than this informal one.  Here we go!

The book begins with a bang in these four verses!  Take a minute to drink them in… they are simply amazing!  Look first of all at the contrast between God’s former ways, and His ways now.  In the past, He spoke through the prophets.  Now, He speaks directly by His Son.  Can you see the difference?  In the Old Testament, there is always an intermediary, but in the New Testament, God speaks directly to us by His Son; this is a paradigm shift of massive proportions.  This Son by whom God speaks is not just some kid. He is not only heir of all things, He is also the one by and through whom God created the entire universe;  When God spoke the words “let there be light” it was the Son’s lips that were moving! Just let that sink in… This is a huge statement. There’s more coming, catch this one:

The Son is the radiance of God’s glory and the exact representation of his being, sustaining all things by his powerful word. The “radiance” of God’s glory!  Jesus Christ is the radiance of God’s glory, and God sent Him to be with us, to teach us, to have relationships with us… and to die for us.  It’s one thing to be amazed at God’s unending love for us is sending His Son to die for us, but when you combine that kind of love with just exactly who this Jesus is… WOW!

“…sustaining all things by his powerful word.”  Ever wonder why the planets don’t just fly off into space?  Ever wonder why the season keep coming at the right time after all of these years?  Ever wonder who made up the laws of physics, of nature, of right and wrong? Ever wonder why your head doesn’t explode?  The entire universe is sustained by His Word!  Ever wonder why so many people seek to denigrate the Bible? Now you know why, it is His Word, it is so powerful that it could call the universe into existence.  It is nothing to be trifled with, as so many philosophers have found out! It is a force that we cannot even begin to fathom, and God sent Him to give us direct access to Him.  If this does not inspire you, then maybe you need to see if you can still fog a mirror!

After He finished His work on the earth, He was returned to the glory from whence He had come, superior to the angels, yes. Superior to all living beings everywhere? Yes.This is our Savior, with whom we have a relationship.  I wonder, do we value that relationship as we ought?

Hebrews is simply an awesome book. I think you’ll see as we continue going through it, that it is like no other!