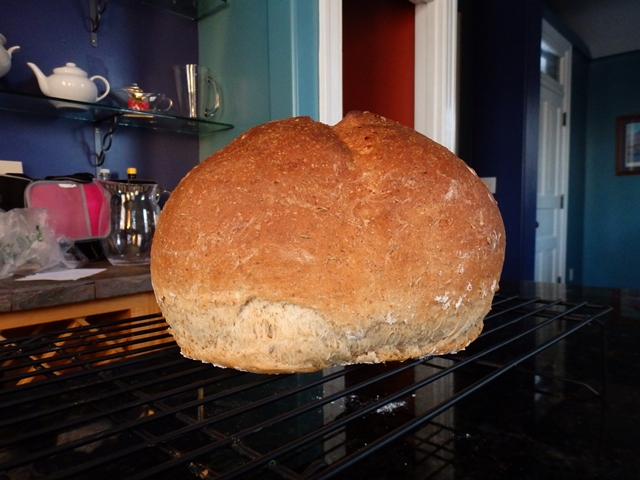 As I was working on making rye bread for this week’s turkey stuffing, the thought occurred to me that people might wonder what the point is to making homemade bread for stuffing when you can buy it in the store and save a great amount of time. Of course one possible answer to such a question could be that the person doing this is simply a food snob, and I might consider a guilty plea to that one. A better reason is simply that the final product tastes better, and that is true without a doubt.

Don’t get me wrong, I used those store brands for years, and they aren’t bad at all, but after that year I did the “Traditional” Thanksgiving dinner entirely from scratch, I found out the well kept little secret that homemade bread makes all the difference. There are two reasons for this, once is that homemade bread just tastes better anyway. The other reason is that you have a great deal more control over the flavor of the bread itself that is being used for the stuffing, meaning that you can alter it to suit the seasonings you plan to use in the stuffing. In the case of the rye bread stuffing, I looked at what was available in our local Hy-Vee market this evening, and I didn’t see it anywhere; no surprise there. I doubt that it’s likely to be found anywhere in this area, which (and this will surely sound like the words of a food snob) is a culinary desert.

With all that said, I used my normal practice of making a dough starter, for this one a sponge starter,

which although it takes longer, builds far more complex flavor from the ingredients in the bread.  Please understand that I am not talking about “proofing” the yeast here, for I use instant yeast that requires no “proofing” at all; this is entirely an optional step that I use to enhance flavor.If you aren’t familiar with this process, you simply take a certain percentage (usually you use a table to calculate how much of each ingredient) and then you combine those ingredients with all of the liquid to make a sort of a batter, and then you cover that with all of the rest of the ingredients, which are still entirely dry. This is covered with a damp cloth on your counter for at least an hour, but never more than four hours. As an alternative, you can develop even more flavor by letting it rest in the refrigerator overnight.

The starter will begin to bubble, as the yeast does its thing, causing the flour on top to begin to crack (see photo) and then it will push up through the cracks. That is when you mix everything together and begin to knead the dough. The result is flavor unlike anything you can normally buy at the store. I made two loaves, one for stuffing, and one to serve with dinner.

Other notes from Monday: We finally got to the grocery store; boy that was fun… The weekend storm seems to have caught everyone by surprise; this town is an ice rink! It was sort of a lucky break that we didn’t do the shopping earlier as planned, as we’ve had 5 cancellations since I published the menu, not that I’m suggesting a connection of course; now we have to decide what we’ll do with all the money we saved. My initial guess is that it will go to the power company for the extra heat the storm is causing everyone to need.

One last note, I regret to inform you that I have been forced to make a menu change. I posted yesterday that we would be having scalloped potatoes with fennel, but She Who Must Be Obeyed has seen to it that I can never make that one again. No, it isn’t that; she loves that one. It’s because last time I made it, I chopped off the ends of two of my fingers using the mandoline to slice the potatoes.

I have to tell you that I really hate it when that kind of thing happens; it’s really an inconvenience. One must make a run for the sink and wash the “affected area” and then grab a bunch of paper towels and squeeze to stop the bleeding, and when it slows down some, then you have to grab the duct tape out of the drawer and wrap the situation up tightly, often one handed, and then attend to the mess you just made all over the place. In that case, I had to account for the pieces that were no longer attached to my fingers and throw away all of the potatoes that got messed up with blood… and to top it off, I had to drag out more potatoes and slice them to make up for the loss, wasting time and money in the process.

Oh yes, and it hurt like the dickens… We won’t get into the colorful and creative language that I might have used at the time.

Yes, of course she has a point, blind people shouldn’t play with mandolins, but I was going to give that job to Chef Brian when he’s here. Yet even that is out, because as I discovered earlier today, Mrs. Don threw the mandoline away so I wouldn’t use it when nobody’s looking. You know, it’s amazing how well she knows me! At any rate, the substitute dish will be roast garlic mashed potatoes.

A long time teacher and writer, Don hopes to share his varied life's experiences in a different way with a Christian perspective.
View all posts by Don Merritt →
This entry was posted in Christian Life and tagged Christian, encouragement, food, hope, life, photography, photos, Thanksgiving. Bookmark the permalink.

3 Responses to Notes From Monday- Redux