A Brief History of Progressivism, Episode 1

Back on November 18 of last year, I published a post called OK Don, What is Your Point? That followed several posts that I published about the Election of 2016 and its aftermath. In that post, I set forth my belief that we in the US, and in certain other countries to one degree or another, are nearing the end of a hundred years or more of an ideological struggle between Classical Liberalism and Progressivism. We have run out of compromises and statesmen, and now one side or the other must win out in order to move forward.

At the end of that post, I mentioned that I would run a special series of posts on Sunday afternoons (my time) discussing the history of Progressivism beginning in January 2017. I asked for comments, and they were positive about the series… and then I held off beginning the series until now.

The reason I’ve held off was simply to watch what has been going on with the Inauguration of Donald Trump and the reaction of his political opponents as events continue to play out, and play out they have. I am writing this post on Thursday morning, February 2, 2017 and fresh in my mind is the news from last night of the peaceful protest in Berkeley, California designed to deny freedom of speech to a 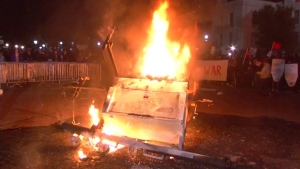 “conservative” speaker at the University of California. University officials stopped the appearance and secreted the guest speaker from the Campus. This morning they are saying that the students were peaceful, but “outside agitators”, “Anarchist extremists” came in and are responsible for the violence, and I have no doubt that they are correct in this, for this has been a tactic of the Progressive Movement for over a hundred years now. No arrests were made.

That is also what took place in Washington on Inauguration Day when violent protests broke out in several places. In Chicago, during one peaceful protest after the Inauguration, certain protesters set a woman’s hair on fire because she was wearing a Trump hat. The woman apparently wasn’t injured, and the story was not covered, although there is video:

It is ironic that this happened during the chant of “Love Trumps Hate”.

We all have a right to protest when we disagree with what is going on in this country; this is a hallmark of our freedom. Yet when such protest is invaded by “extremists” spurred on by “agitators” (now usually called ‘community organizers’) take notice; it isn’t a spontaneous uprising of the disadvantaged, for it is a very old play from a very old playbook.

And this is only the beginning.

As we go through the history of Progressivism, you will see exactly where I am drawing this information from; I will provide you with historical sources and references so that you need not take my word for any of this. You will learn exactly what the ideology of Progressivism is, and how it has played out both in the United States and a couple of European Nations over the past century oh yes, this is going to be a great deal of fun!

We will begin our story with a tale of a young boy named Thomas who was born in Staunton, Virginia in December of 1858, a young boy who would later tell associates and friends that his earliest childhood memory was of the terrible news that Abraham Lincoln had been elected president. It’s a charming tale of a charming young man, and it will begin right here next Sunday, see you then!

A long time teacher and writer, Don hopes to share his varied life's experiences in a different way with a Christian perspective.
View all posts by Don Merritt →
This entry was posted in Progressivism and tagged Christian, life. Bookmark the permalink.

18 Responses to A Brief History of Progressivism, Episode 1