The Night When God was Naked Before Man 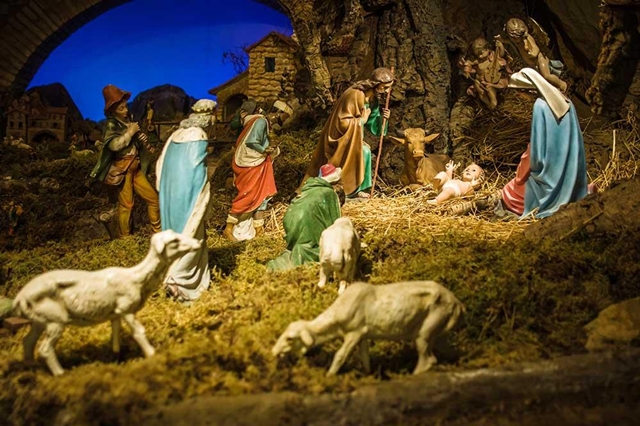 I like nativity scenes; they are the one thing we see around us this time of year that actually have something to do with what we are supposed to be celebrating. Yet sadly, even most nativity scenes, whether sculpted or painted… and certainly those that are reenacted… don’t portray reality.

When Joseph and Mary arrived in the City of David on that fateful day, there was no room at the Inn and they found shelter in a “manger”. We think of this as being like a barn, a really nice barn, but it would have been more like a cave where animals are penned up. Such a place would not be charming, rustic or romantic, it would most likely have been a stinking hole, a place lower than low.

We depict the scene with radiating light, a kind of heavenly ambiance, but in addition to the stench, it also would most likely have been dark, cold and damp, infested with flies… yuk.

We often see paintings of Mary after giving birth looking as if she has just put on her best gown after a day at the spa, but if you have ever been a mother who just gave birth, of have been with a mother who just gave birth, you know very well that is a lie. Giving birth is nothing if not messy, sweaty and bloody, and mothers are not looking their best at that particular time.

In our songs about this amazing event, we see the Baby Jesus sleeping so peacefully; “not a cry he makes”… Seriously?

Later on a bunch of shepherds arrived to pay homage after an encounter with a squad of angels, and we depict them in their Sunday best as though shepherds were anything other than the bottom of the socioeconomic ladder of the time.

Yes dear reader, we romanticize the entire scene, and that is a great shame.

Look at what Paul said about Jesus:

Who, being in very nature God,
did not consider equality with God something to be used to his own advantage;
rather, he made himself nothing
by taking the very nature of a servant,
being made in human likeness.
And being found in appearance as a man,
he humbled himself
by becoming obedient to death—
even death on a cross!

When Jesus was born in that manger, there were no divine trappings of any kind; it was cold hard reality. Jesus left glory behind entirely when He came to earth and He was just like we are in every way. He grew hungry, thirsty and tired, He sweated, He needed bathroom breaks, He had body odor, He caught colds… there was nothing about Him that set Him apart from anyone else in the physical sense; according to Isaiah, he wasn’t even good looking. In the manger, He entered this world naked; on the cross He left this world naked in the physical sense.

In between, He taught and healed and brought hope to Mankind that so desperately needs all of these and He did so without pretense or any worldly glamour or greatness; He was naked in the metaphorical sense, for in Jesus God is naked before Man with nothing standing in between.

Nearly two years ago, I wrote a series of posts about our need to be naked before God, to take away everything that comes between us and God and to approach His presence in complete humility and openness.

How hard that can be!

Yet in this, as in all things, Jesus is our model. If only we would resist the temptation to sanitize His story, maybe His humility and humanity would be easier for us to grasp, and we could see how truly awesome His divinity is. Yes, maybe that would make it easier for us to strip away everything that separates us from God in this life.

A long time teacher and writer, Don hopes to share his varied life's experiences in a different way with a Christian perspective.
View all posts by Don Merritt →
This entry was posted in Christian Life and tagged Bible, Christian, Christmas, Devotional, encouragement, hope, inspiration, Jesus, life, love. Bookmark the permalink.

8 Responses to The Night When God was Naked Before Man