I Have this Theory… 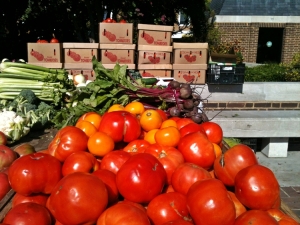 I know from the comments that many of you have gone down this same road that we have concerning nutrition, eating right and stewardship of our bodies; it can be a daunting task. With all of the conflicting “science”, not to mention the way that the standards and scientific evidence seems to change all the time; you know, something is healthy, then it isn’t healthy, then it’s good again.

It’s hard for the average person to know much of anything for certain.

I think that’s why so many find themselves flirting with conspiracy theories: “Those studies are rigged by big-business, special interests and government corruption. “ “The Truth that They Don’t Want You to Know”.

If you ask me, that’s just lazy thinking. No doubt some studies are more reliable than others, but all of those plots- I doubt it.

So, I’ve been trying to look at this whole subject another way…

From the first, I’ve framed this as a matter of Christian stewardship, so why not look at it from a more Biblical point of view and ask if there are clues in the Scriptures. We know two things right off: First, we know that God gave us the teeth of an omnivore; we can eat both plants and meats. We also know that when the first humans were created, God put them in a garden and made the fruit of all of the trees and the plants of the garden theirs to eat, except one: they apparently were plant-eaters when in God’s perfect environment, when Man stood naked and unashamed before God.

However, they were told to be fruitful and multiply, and to fill the earth and have dominion over all of the plants and animals in it.  We also know that the earth is very diverse in ecosystems, climate and terrains, and each has a different variety of foods available for human consumption. As people began to appear on the scene and move away from Paradise to fill the earth, they would need the ability to eat whatever was available to them in order to survive, and this was God’s original intention, even before the events of Genesis 3. After Genesis 3 however, even Adam and Eve were banned from the Garden, and had to survive as hunter-gatherers, and thus, we can conclude that God was very intentional in creating us to be omnivores.

In our little case study here, we considered two videos, each representing opposite approaches to nutrition. Both cite evidence supporting their approaches, and they appear at first to contradict one another, but if you think about it, that contradiction is only present if we assume that they must be mutually exclusive.

What if they aren’t?

If we think about God’s intention that we should fill the entire earth, and the diversity in food availability and conditions on the ground, and then remember that the first video which based its approach on the diet of Aboriginal people of Australia, and the second which looked at the rural peoples of China and the Philippines, and then consider the significant differences in those locations, why should we be surprised at the difference in diet? Why would we be surprised that even though they appear to be opposites, that they would both result in good health, when the subject, humans created by God, were designed to succeed and flourish everywhere?

Both “extremes” agree that the diet related health problems came from the intervention of modern Man into what God created to be perfect. If that is true, then wouldn’t the answer to the riddle center around the removal of those interventions, namely processed and artificial foods?

It seems to me that if we eliminate all processed and artificial foods from our diets, and stop overeating, we should free ourselves of the likelihood of diet-related health problems, reverse any that we have already which are reversable and gradually achieve the weight that is ideal for us. The only proviso that I would have to add to that is that we should be careful that what we eat covers the nutritional requirements of the human body, which is to say that if leafy greens are my favorite food, I’ll can’t eat only leafy greens− does that make sense?

Maybe this is way too simple, maybe I’m crazy, but at first blush it seems to make sense: what do you think?

A long time teacher and writer, Don hopes to share his varied life's experiences in a different way with a Christian perspective.
View all posts by Don Merritt →
This entry was posted in Christian living and tagged Christian, encouragement, food, hope, life, nutrition, perspective, photos. Bookmark the permalink.

25 Responses to I Have this Theory…