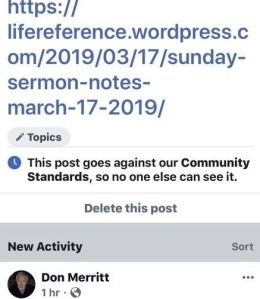 Too Shocking to be Seen!!

Something happened yesterday that I thought I’d share with you, something you might wish to think about, or maybe just for a laugh.

It seems that yesterday’s Sermon Notes were just too much for Facebook and had to be censored.

Yep, they blocked it for violating “Community Standards” which were no doubt established by someone a Corporate who has neither a face or a name.

I was running short on time, so I tried posting a little note instead saying that the Notes had been blocked, but here’s a link (to this site) if you are interested… and they blocked that too. Then I reposted the note without the link and that went through and remains on our Church Facebook page.

Later I wondered if Facebook has a new rule about links… after all, this was a rough weekend there since they had just been caught running a live stream of a mass murder spree in New Zealand. To test this, I posted a random link from the New York Times… and there was no problem.

My cynical mind started wandering around and I wondered if this site is blocked, you know, because I’m some kind of counter-revolutionary element− Dangerous, unhinged, scary… and of course, my all-time favorite: “Right-Wing”.

After all this site is about Jesus and love and mercy and kindness− scary stuff!

To be sure, nobody at Facebook has ever read the post they blocked; the blocking was instantaneous. Ironically, the post is about the spirit of antichrist which is in the world we live in.

Well, it doesn’t really matter to me, I’ve never been a big fan of the site and I lost confidence in their integrity long ago, and have hardly been there since they blocked my posts from the Word Press “publicize” feature. I simply never bothered to go through the hoops to prove I’m a real person and who knows… maybe I’m only a figment of my imagination… maybe I’m a Russian agent or something.

OK fine, now I’m just making light of it all. Oh, and yes, I could have just copied and pasted the text without a link and it would probably have posted, and maybe I’ll do that later just to see. I guess my real question is this: Why is anyone still there on Facebook after everything we’ve learned about their operation over the last couple of years?

Ah well, I hope you all have a very pleasant Monday and a great week.

A long time teacher and writer, Don hopes to share his varied life's experiences in a different way with a Christian perspective.
View all posts by Don Merritt →
This entry was posted in Christian living and tagged blog, Christian, encouragement, life, personal, thoughts. Bookmark the permalink.