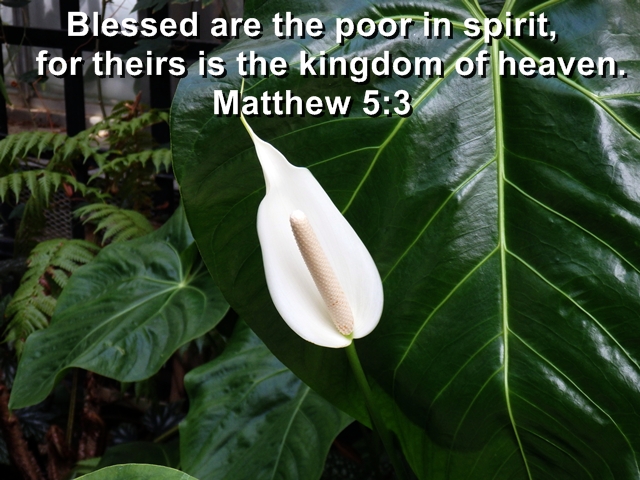 The first Beatitude speaks of those who are “poor in spirit”. Much has been made about the difference between Matthew’s language and that of Luke in Luke 6:20, for Luke merely says “the poor”. Does Matthew have more in mind than mere economic circumstances?
I’m happy to let others argue, but it seems to me that Matthew, a Jew, might be aware of the Old Testament idea of poverty not only in literal terms, but as a state of mind, for the Hebrew word for “poor” has this additional connotation to it. In those days, a poor person not only had to deal with bad economic circumstances, they also had to contend with the fact that they had fewer rights in society, for then as now, they lacked the resources to enforce their rights; consequently they were at the mercy of others.

Living in such a state made it clear to anyone who could fathom the notion, that the poor must depend entirely upon God. Most of us today, even those of us who don’t enjoy material abundance, live in circumstances far better than those of a poor person in ancient times, and maybe we too have a hard time seeing what Matthew means; let’s look at it this way: In our world, a person of very limited means is never far from being destitute, while a rich person has a much larger buffer to get through tough times. The poor person knows they live close to the edge; the rich person can convince himself that everything is wonderful, that he is the master of his own life, and in doing so, he only deceives himself, for God is the master of everything. We see time and again in Scripture that a rich person has a great obstacle to overcome in following God, for he thinks he is the one in control, while a poor man has no such delusion to overcome, and no great wealth to hold him back. The poor person is free to follow the Lord, while the rich person carries his wealth as a millstone around his neck; woe is he.

The kingdom of heaven is both a present reality and a future hope, for it is with us today in Christ, and will be fully realized in its ultimate fulfillment when He returns. For the person who recognizes his or her current dependence upon God for everything in life, it is a present reality indeed, and a source of great joy, “for theirs truly is the kingdom of heaven.”

A long time teacher and writer, Don hopes to share his varied life's experiences in a different way with a Christian perspective.
View all posts by Don Merritt →
This entry was posted in Christian living and tagged Bible, Christian, Devotional, encouragement, hope, inspiration, Jesus, life, love. Bookmark the permalink.