The Movement and the Religious 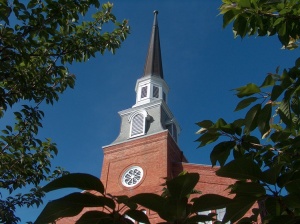 Last time we looked briefly at the events that took place at Pentecost, but of course, those events were not the end of the story; they were only the opening chapter. The Apostles saw amazing success when they first preached the Gospel among the Jews in and around Jerusalem, but the religious “Establishment” were not about to let them drain their swamp: They would fight back with ruthless zeal, as swamp dwellers have been known to do. In due course, the Gospel was driven out of Judea and into the lands of the Gentiles by persecution.

God raised up another Apostle from among the persecutors of His people, and Saul of Tarsus becomes Paul the Apostle to the Gentiles. I’m sure that I don’t need to retell Paul’s story from Acts here other than to say that because of his missionary endeavors, the Gospel spread like wildfire throughout the Eastern Mediterranean region. Yet despite the efforts of Paul and many others this great Movement that we call the Church or the Kingdom, began to come under the influence of those who would bring the old ways back into its midst.

Paul sometimes called these elements “Judaizers”, referring to them by various terms at various times, but always with sharp disapproval. To the Galatian churches he wrote:

You foolish Galatians! Who has bewitched you? Before your very eyes Jesus Christ was clearly portrayed as crucified. I would like to learn just one thing from you: Did you receive the Spirit by the works of the law, or by believing what you heard? Are you so foolish? After beginning by means of the Spirit, are you now trying to finish by means of the flesh? Have you experienced so much in vain—if it really was in vain? So again I ask, does God give you his Spirit and work miracles among you by the works of the law, or by your believing what you heard? So also Abraham “believed God, and it was credited to him as righteousness.

Believe it or not, people actually came into our great Movement and began to persuade followers of Jesus that they could not follow Him until they put themselves under the Law and conformed to its obsolete practices.

Understand, then, that those who have faith are children of Abraham. Scripture foresaw that God would justify the Gentiles by faith, and announced the gospel in advance to Abraham: “All nations will be blessed through you.” So those who rely on faith are blessed along with Abraham, the man of faith. (3:7-9)

Yet Paul is far from finished:

For all who rely on the works of the law are under a curse, as it is written: “Cursed is everyone who does not continue to do everything written in the Book of the Law.” (3:10)

Bear in mind that when we see the term “Book of the Law”, Paul is quoting Deuteronomy 27:26− this is the Law God gave to Moses, not something some guy just made up. Do we like our chances relying upon man-made rules? This is precisely what Jesus went to the cross to set us free from:

Clearly no one who relies on the law is justified before God, because “the righteous will live by faith.” The law is not based on faith; on the contrary, it says, “The person who does these things will live by them.” Christ redeemed us from the curse of the law by becoming a curse for us, for it is written: “Cursed is everyone who is hung on a pole.” He redeemed us in order that the blessing given to Abraham might come to the Gentiles through Christ Jesus, so that by faith we might receive the promise of the Spirit. (3:11-14)

The whole point of this great Movement, the church, is that God did not desire a relationship with His people that was based on mere transaction, but instead, upon His great and abundant love for us, and our response to Him.

A long time teacher and writer, Don hopes to share his varied life's experiences in a different way with a Christian perspective.
View all posts by Don Merritt →
This entry was posted in Christian living and tagged Bible, Christian, church, encouragement, hope, inspiration, Jesus, life, love. Bookmark the permalink.

4 Responses to The Movement and the Religious